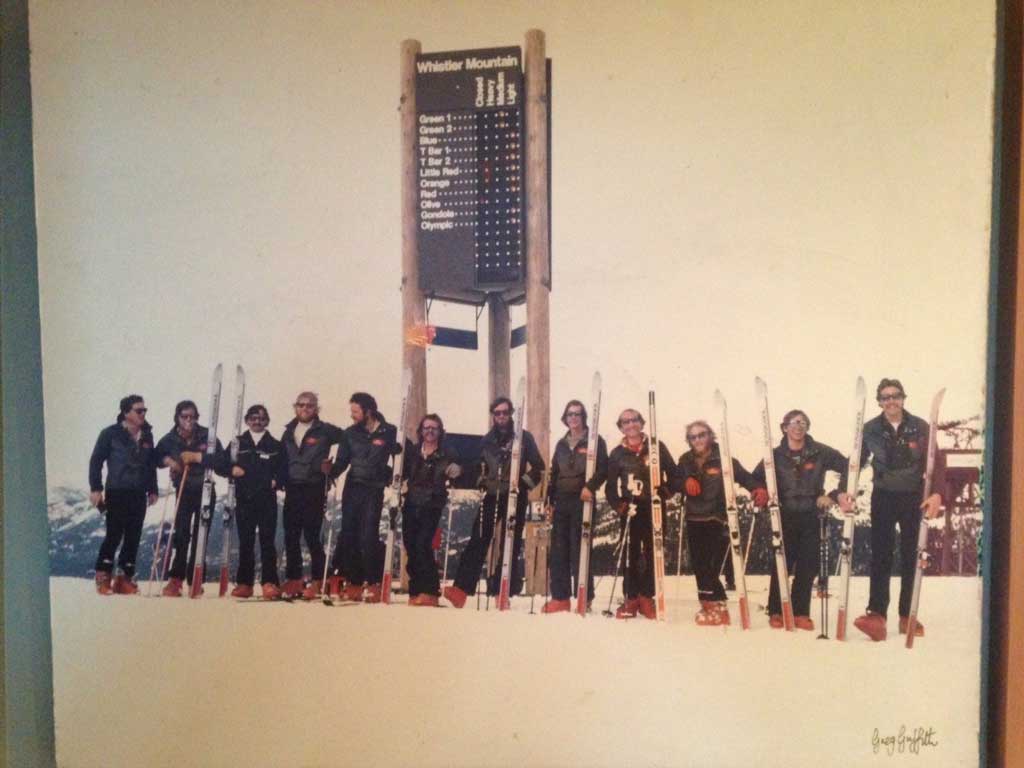 This week’s guest is Roger McCarthy, long time Whistler resident and an international ski area consultant pictured below third on the left. This is pre village, pre north side lifts "Olympic" on light board means the bus is running or not.

Getting off the train from North Vancouver on November 20, 1971, a hand painted sign on an open sided shed confirmed that I was in fact in Alta Lake B.C. the official Canadian bidder for the 1968 Olympics! I was finally here, in a “Major North American ski resort” With a puff and a toot, the bud car pulled out heading for Pemberton, I looked around, the lake was partially frozen, the snow on the ground was very light with a trail that led off adjacent to the tracks, there were no directional signs. A few other travelers and I followed the tracks to a narrow path at the south end of the lake, here it climbed a very steep trail that was impossible to ascend with ones baggage, we formed a conga line of sorts and managed to get everything up to the edge of the road on the snow bank. I arrived on the top of the bank just in time to see my first snowplow headed toward us at a speed that threw up a huge cloud of powder snow. It needed no explanation, we all dove off down the bank while getting half buried in snow; “Welcome to Whistler”. We managed to get a car to stop, he took our bags to the cafeteria while we walked the ½ mile in a silent snowstorm. Only the gas station was open, there were three hotels at the time, the largest had 15 rooms. Forty five years later so much has changed, Whistler is without a doubt one of the leading resorts in the World with so many reasons to come and visit at any time of the year.

The mountains surrounding this valley, beautiful, spectacular, each has its own characteristics, personality, vistas. There is development throughout the valley and around the lakes although Lost Lake has been spared any development, known for general nakedness back in the day it is good to see it maintains a little natural state! The Village takes the place of the original garbage dump where bears were plentiful. It is interesting to look back at what was and then turn to what is and realize that so much of the intrinsic beauty, the natural places are preserved and cherished.

I worked in the Cheakamus Inn the first winter as a handyman/dishwasher/fix it guy. I worked a variety of jobs in construction, restaurants and eventually went to work as a lift operator. They put me at the top of the T Bar, I later found out that it was where they put people they thought would not last as it required minimal training. I worked my way up through the ski patrol and director of the ski patrol, and on to Manager of Safety and Lift Operations. It would be in that role that I had one of the greatest but most interesting challenges: the Peak Chair on Whistler Mountain. It was a formidable task in planning the safety and operations of the terrain accessed by lift anywhere in North America. The original Peak Chair was a triple chair where the chairs stayed on the cable all year. Ice buildup during storms was a major issue but nothing compared to the challenges presented by the five major bowls with kilometers of corniced ridges and significant avalanche hazards requiring extensive explosive avalanche control work prior to opening after a storm. Many hours were and still are spent on skis or in the helicopter throwing bombs to trigger the avalanches and reduce the giant cornices that form so quickly in this snow climate. Throughout this period Blackcomb arrived as competition, the Village was built and much changed in the valley and on the mountains.

I have lived and worked in ski areas all over the U.S and Canada, I lived in Moscow and worked on Sochi for two years, I am in France usually twice a year to tour resorts with ski industry people from North America. There are a lot of great ski areas around the World and yet, the Lower Dave Murray (the Sewer) in the pink light of late afternoon is my favorite place in the World, Middle Franz is an extraordinary place also. One of my best days on skis was two years ago bumping into Hugh Smythe, John Hetherington and Chris Stethem all ex Whistler Patrol Directors. The boys just ripped up Whistler and then headed for Blackcomb and were treated to a high speed tour of Blackcomb led by Hugh…..he hasn’t lost his touch!!

It is a special place with extraordinary terrain, extremely talented snowmaking and grooming crews and very special people, it is where I choose to live!
Sochi Alpine is the same elevation as Whistler and about the same distance from the Black Sea as we are from Howe sound.