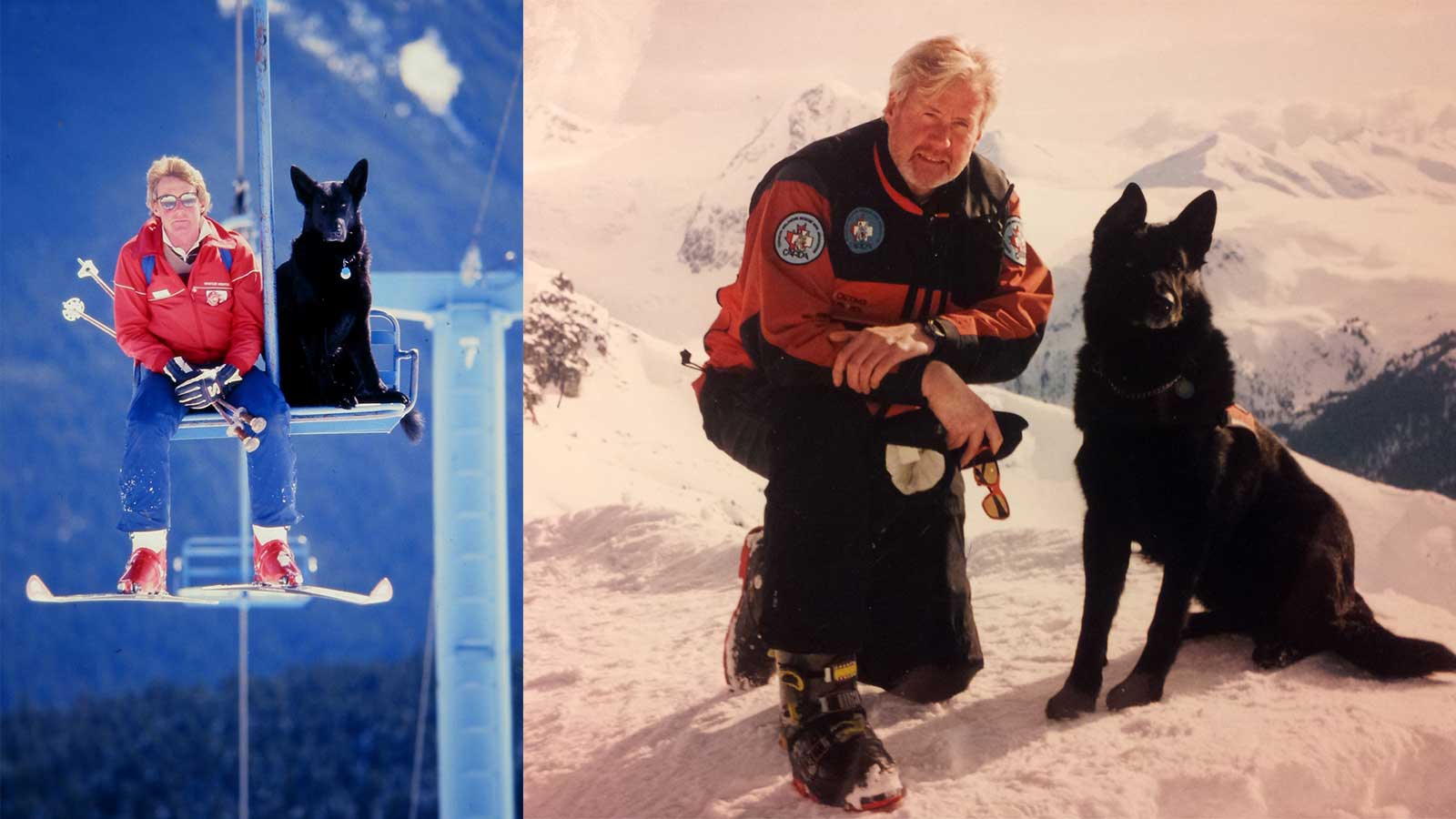 When I arrived in Alta Lake in 1973 I didn’t have a clue about avalanches. I was interested in getting a patrol job so I made sure I got to know the Professional Ski Patrollers and learned the ropes. The following year they doubled in size and I made it on. I started taking courses and learning from the veterans what caused the slopes to slide and what you did to rescue victims.

Reality set in when a good friend fell down Whistler Bowl while doing avalanche bomb recovery in the fall of ‘76. This made me realize of how fragile and unforgiving the mountain environment can be.

A few months later I was buried in an avalanche myself, while doing control work below Whistler Peak Chair. It made me aware how little I knew and how lucky I was to have survived.

Later that season it was suggested by the Safety Supervisor that if someone would take it on, Whistler Mountain would support an avalanche rescue dog. I jumped at the opportunity.

It was an intense process having to learn what kind of dog to buy and how to train and motivate a dog to work. The RCMP were very helpful knowing that to successfully save someone in an avalanche, the rescuers would need to be there faster than they could ever be.

Whistler wanted to make sure they were covered legally and that I was qualified to do the work of rescue and recovery. Therefore they insisted that I have something in writing from the RCMP that confirmed this. The next year I attended a Parks Canada / RCMP validation course in Jasper only to be turned away because I didn’t have the proper paperwork to be out of my home province on a government course. The following year I had all the proper paperwork done and attended a similar course in Banff receiving a letter stating that I was qualified to attend avalanche incidents and work my trained dog, Radar, searching for victims. With the help and sponsorship of Whistler Mountain I had attained my validation alongside the Parks Canada and RCMP dog masters and became the first and only civilian to do so at one of their courses. Eventually we were encouraged to fundraise, market and apply to the government for support. Some of our handlers went to Europe and brought back ideas and we invited handlers from there to join us at our courses to share experiences and training ideas. Eventually we were recognized in Europe and the United States as a premier organization; CARDA.

Today we have 28 validated teams across British Columbia, Alberta and the Yukon; there are 13 affiliate members, 12 associate members and 2 honorary members of which I am one. Participants come to our courses mostly from BC, Alberta and the Yukon but also from a number of US ski resorts and Europe. Some long standing dog masters are training their 4th dog and many are on the 3rd. That is three to four decades of commitment.

CARDA now organizes three training courses each year and this year we will have our General Course on Whistler Mountain in January. There will be approximately 25 participants, 10 instructors, a course co-ordinator and a Validating member overseen by the RCMP Police Dog Supervisor. Parks Canada or a certified Mountain Guide will assess mountaineering skills. All participants must be members of their local Search and Rescue organization (PEP), they must be certified in basic first aid, avalanche courses and be proficient back country skiers. Surprisingly there is keen interest from new candidates each and every year and there is nothing better for me to watch their enthusiasm and dedication.

The commitment in terms of time and money is huge. The cost is approximately $60,000 for the life of an avalanche rescue dog when you take into account all the courses, equipment and vet bills. If your employer helps with some of the expenses, you are lucky. CARDA supplies some equipment to the teams and some receive food sponsorships and discounts on vet bills. Accident insurance is important to have but it is best to be aware that you don’t just have a pet but a very expensive piece of equipment that you can’t just go out and replace if it breaks. Everything considered, being an avalanche rescue dog team is a very rewarding occupation whether you are a professional or a volunteer. You have a partner that can show you things that you would never see or do without them. Using their incredible nose and a sixth sense, they outperform teams of humans time and time again.

I consider myself very lucky to have found this in my life and been able to relate to so many like-minded masters and dogs.

If you are interested in the very basics of mountain safety as it relates to children, check out the illustrated children’s book Radar The Rescue Dog which is for sale at the Whistler Museum, Whoola Toys and Armchair Books.

Our new Prime Minister Justin Trudeau wrote a very insightful and down to earth forward to the story:

Stay safe out there and remember..... When you're buried, every second count!

For more information go to www.carda.ca